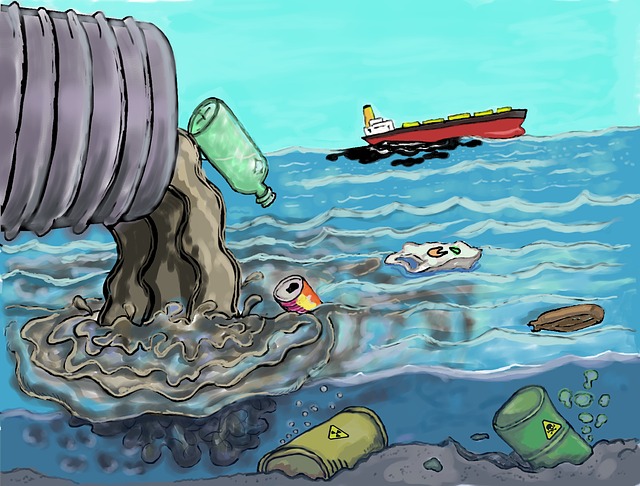 Oceans make up a large % of the Earth’s total surface area.

Further to that, oceans and their wildlife are important in a number of ways for humans and the ecosystems and life on Earth.

In this guide, we look at what some of the biggest potential problems for our oceans, coasts and marine life might be.

This guide compliments our separate guide on some of the potential solutions to conserve oceans and address these problems.

One of the effects of overfishing is that it can threaten and endanger certain species.

Species endangerment or a significant decrease in a species’ population can impact the ecosystem and food chain, because one species or type of animal might depend on another to survive, or the endangered species might fulfil specific functions within the ecosystem.

This has a domino effect because the marine ecosystem relies on healthy numbers of organisms and marine life to support one another. Humans also rely on healthy populations of fish and other marine life to make a living from and eat.

Certain fishing techniques can pull too many fish, or too many non-target fish. By-catching is a separate issue though whereby unwanted marine life is pulled in the nets whilst trying to catch other marine life.

The Food and Agriculture Organization estimates that over 70% of the world’s fish species have been entirely exploited or depleted (worldoceansday.ca)

Destructive fishing practices may damage or degrade the ocean floor, and important parts of the ecosystem like marine life habitats, coral, and so on

These practices may also have a damaging impact on marine life directly in someway, via injury or death

These practices can relate to how catches are pulled, and sometimes also lost or discarded gear

Another example is drag net fishing that can destroy coral, and endanger dolphins and other marine life.

Ghost Fishing is another issue where lost or discarded fishing gear continues to catch fish and other marine life (worldoceansday.ca)

Second, killing certain species for only one body part causes the issue of waste, where only the one body part might be used instead of as much of the catch as possible

Some specific cultures have beliefs around the medicinal, health based, or spiritual based properties of a certain species or body part

Sharks in particular can be killed for their fins (for fin soup) … and the result is two fold [as sharks can be a predator, but there’s also waste]

Certain wildlife are [also] fished for their health benefits of oils

Whaling can be another issue – whales being killed causes issues in the marine ecosystem elsewhere (worldoceansday.ca)

The ocean absorbs CO2 emissions from natural sources on Earth.

But, certain human activity also emits CO2 emissions (mainly from the burning of fossil fuels), and the ocean also absorbs this additional CO2.

Ocean acidification happens when seawater absorbs this excess carbon dioxide, and it dissolves in the water.

The result is the ocean’s average water pH levels getting lower, and it becomes more acidic.

Another contributing factor to ocean acidification can be eutrophication, which is explained below in this guide.

In the past 200 years alone, ocean water has become 30 percent more acidic (ocean.si.edu)

… extra CO2 is being absorbed by the ocean and shellfish, coral and other species are at risk of being threatened and eliminated if they can’t adapt quickly enough (treehugger.com)

Coral helps support small marine life in various ways, such as providing a habitat and a home

One of the potential effects of a changing climate is said to be warming ocean waters.

When waters warm, coral can get stressed or die, and this is known as coral bleaching, as coral can change color.

The nytimes.com indicates that some coral can sometimes recover over the course of a decade or more when the water cools again, but sometimes the effects are irreversible or there is a mass die off

Coral can also be vulnerable to ocean acidification, land based pollution that gets into the ocean, and other threats

The relationship between dead zones, eutrophication and algal blooms is as follows:

– Eutrophication occurs when excess nutrients, mainly nitrogen or phosphorus, get into the water (a primary cause of this in developed countries is run off from nitrogen and phosphorus based fertilizers used in agriculture, but it can also happen from waste water and industrial waste)

– Algal blooms can create dead spots and dead zones in the ocean where there a lack of oxygen in those areas. This can happen in several ways, such as algae blocking sunlight, and algae preventing other aquatic life from getting oxygen

– Algal blooms can be followed by hypoxia, which also relates to a lack of oxygen (nationalgeographic.org)

Mercury mainly gets into the ocean via the burning of fossil fuels like coal at power plants whereby rain washes it into the ocean, and also from industrial waste/effluent (containing heavy metals like mercury) being discharged into rivers and waterways or directly into the ocean

The smallest marine life absorb [mercury], and it works its way up the food chain to fish like tuna, and into humans (treehugger.com)

Solid waste can work it’s way into the ocean in a number of ways.

It can happen via rivers and waterways, via wind, via directly littering, and even out at sea when fishing gear and materials are dumped into or lost at sea.

One example of solid waste pollution in the ocean is plastic pollution.

Plastic is actually one of the most common waste materials found both on beaches and in the ocean.

[Plastic also costs money to remove from the ocean]

Dumping of toxic waste and hazardous waste into the ocean can also be a waste pollution issue.

There’s a number of ways that fish farming at sea can impact the ocean such as:

– Nutrient, chemical, medical, excrement, and other forms of waste pollution

What some people also aren’t aware of is that even fish farmed on land might get a certain % of their fish feed and oils from wild caught fish, so, fish farming currently relies on wild populations.

Read more about the potential impact of irresponsible fish farming and aquaculture in this guide.

A few stats about farmed fish production around the world:

In China, 90 percent of fish food production comes from aquaculture (2006)

Overall, aquaculture in the marine environment contributes 34 percent of production and 36 percent of total value

There are a number of potential ways offshore mining and drilling for oil and other fossil fuels can impact the ocean, such as …

When oil is extracted from the ocean floor, other chemicals like mercury, arsenic, and lead come up with it.

Along with the world’s soils and the world’s tropical rainforests, the world’s oceans have some of the highest concentrations of biodiversity.

Ocean biodiversity may decrease or be impacted negatively as a result of other problems, such as overfishing, endangerment of different marine life species, destruction of habitats, and more.

The number and variety of living organisms is decreasing (protectplanetocean.org)

Pirate fishing is a large component of overfishing, and is considered an unsustainable fishing practice

Illegal fishing is as much as 40 per cent of the catch in some fisheries.

Melting or shrinking ice caps might produce some problems, but may also have some benefits.

The shrinking Arctic ice cap is a problem for polar bears [and] There is a need to manage fishing in waters that were formerly under the ice for most of the year (boatinternational.com)

However, boatinternational.com also indicates there could be some benefits of a shrinking ice cap: ‘…[the shrinking Article ice cap might also introduce] species new to the region such as mackerel and Arctic cod and could in theory increase the amount of human food available.

Some of the other potential effects of melting sea ice are included in this guide.

It’s worth noting that ocean shipping and transport contributes significant value to the world economy.

However, it may also present some problems.

Ocean shipping can result in oil spills, ship groundings, anchor damage, and the dumping of rubbish, ballast water, and oily waste are endangering marine habitats around the world (wwf.panda.org)

Lack of protection of certain parts of the ocean might be part of an unsustainable way of managing fisheries, but there’s also environmental damage to consider

Only a tiny fraction of the oceans has been protected: just 3.4%

There are economic benefits to oceanside tourism, but there can be tradeoffs too.

Housing, hotels, construction and holiday tourism are all threats to coastlines by damaging habitats and contributing pollution (wwf.panda.org)

Part of a sustainable tourism strategy might involve figuring out how tourism businesses can thrive, whilst at the same time conserving coastlines and oceans

Other Potential Problems For The Ocean

Read more about the above issues and problems in this Treehugger.com resource

Erosion can also be a problems for beaches and coastlines, and beach nourishment might be one way to address this.