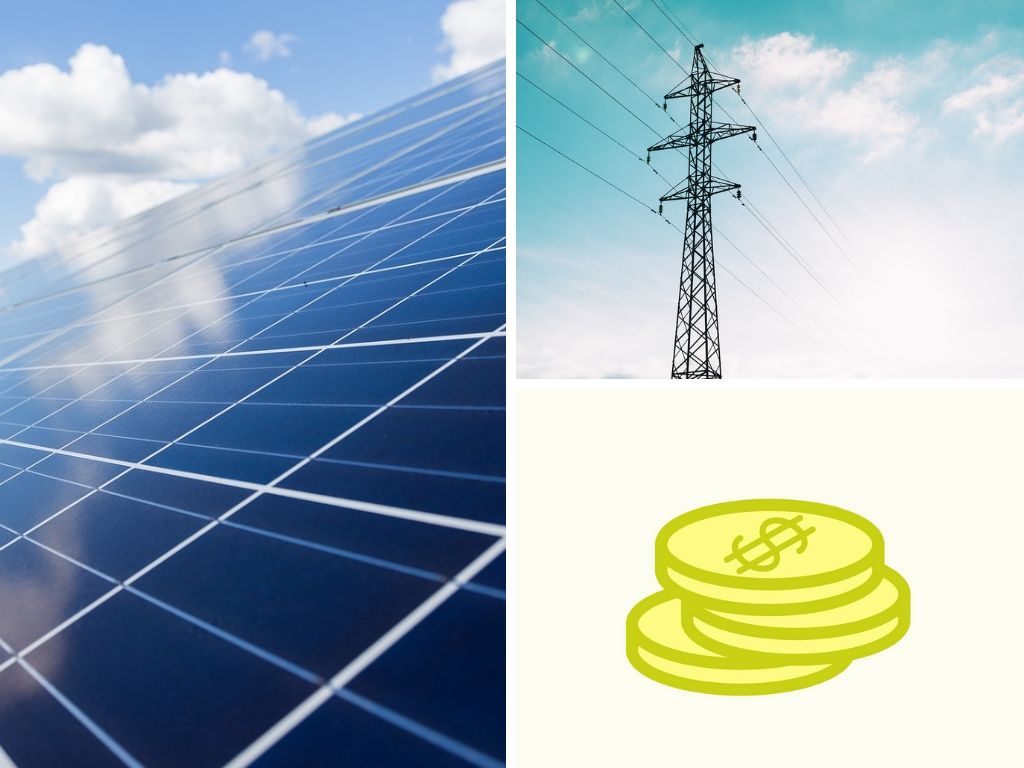 There can be a lot of debate around this question …

In this guide, we provide a general summary to the question, as well as looking at examples around the world where renewable energy is used for electricity production and seeing what the impact on electricity prices are.

Renewable energy is only one of many factors that can impact electricity prices.

This is generally the case on both the national/country wide level, and also the State level.

Ultimately, what impacts electricity prices is country, State and often city specific – as there are different factors and variables (direct vs indirect, short term vs long term, small picture vs big picture, and so on) impacting electricity prices at any one time in any one place.

For example, the factors impacting electricity prices in California may be different to other States in the United States

There are countries and States in the world with renewable energy in their electricity mix that have higher than average electricity prices.

In some of these countries and States, there is strong evidence that the introduction and expansion of renewable energy into the energy mix has correlated with electricity prices increasing significantly.

Some countries and States in the world have seen their electricity prices increase because of several other factors other than renewable energy, such as overall lack of supply of electricity compared to demand, high costs of electricity generation (such as high gas prices), network and infrastructure investment and costs (poles, wires, transmission equipment), and other factors

Solar and wind for example are variable sources of energy, compared to hydropower which may function differently and provide a more constant supply of power

Electricity is a constantly evolving and developing sector.

Solar and wind technology costs and capital costs in particular may continue to drop in the future, and this may lead to further electricity price drops.

Coal and other fossil fuels may get more expensive with requirements for environmentally friendly plants (that minimise carbon and air pollution emissions), carbon penalties/taxes, polluters taxes, and more.

These are just a few considerations though.

Overall, the presence of renewable energy in an energy mix for electricity is just one factor that can impact electricity prices.

To find out what exactly is impacting electricity prices in a specific place over a specific time period, an individual assessment or report for that location and time period is required.

It doesn’t seem accurate enough to generalise that renewable energy does or doesn’t impact electricity prices in a specific way.

A good way to summarise an answer to this question might be (from finder.com.au):

The right-wing commentariat blames renewables, while the federal government blames everyone but itself.

The truth is there is no silver bullet.

No single factor or decision is responsible for electricity prices … Rather, it is the confluence of many different policies and pressures at every step of the electricity supply chain.

*Note – this guide is mainly about retail electricity prices, and not wholesale, commercial or industrial prices.

Also note, some households have their own solar, or other type of renewable energy set up.

This guide considers electricity from the grid only.

Providing power from an individual set up would obviously require a comparison of set up and running costs, feed in credits, taxes, and other factors, compared to obtaining electricity from the grid only.

We have written about these factors in the following guides:

As you can see, different countries and States have different factors that might be impacting their electricity prices in a major way at any one time.

For example, places like Denmark, Germany and Belgium look to have significant taxes related to renewable or green energy development and support attached to their electricity prices.

Phasing out and closing down of competitive or low cost energy sources (in favor of renewable energy) such as nuclear could also be an issue.

Whereas, a place like South Australia may be suffering from other problems such as government energy policy in need of improvement, high network (poles and wires) costs, paying premium prices for existing energy sources (which are also restricted in supply in numerous ways, and pushing prices up as demand increases), inefficient and/or old existing power plants, and so on.

If you want to do your own assessment on your own State or country, this guide may help you in determining what factors might be most responsible for impacting electricity prices where you live.

But, some countries with higher renewable energy share of electricity generation do have higher than average electricity prices, and some of them very high prices.

You can also see some general electricity prices worldwide for notable countries in this guide:

But, some States with higher renewable energy share of electricity generation do have higher than average electricity prices, and some of them very high prices.

Hydropower has traditionally been seen a low cost way to provide consistent power (when water supplies aren’t variable and there is water available year round).

Solar and wind though are variable sources of energy – their power supply can peak and dip with the weather conditions.

The problem with variable energy sources (that need additional support mechanisms) is that huge commercial energy storage batteries are expensive, and other energy sources may have to restrict their own supply capacity and have to ramp up quickly when required (both of which can impact profits and return on investment for these energy suppliers).

This is not to mention upgrades to the existing energy grid infrastructure that have to be made for additional or different energy sources being integrated to it.

For these reasons and others, different types of renewable energy can have a different impact on electricity prices.

Renewable Energy Providing Electricity As A Service, &, Going Beyond The Capital & Operating Cost Of An Energy Source

LCOE stands for the levelised cost of electricity.

It summarises the lifetime cost to generate one unit of electricity for an individual energy source.

Hydro, solar and wind can have low a LCOE because the cost to operate them is low during operation (because fuel like coal, gas or oil doesn’t have to be purchased).

What some people automatically think is that because an energy source has a low electricity generation cost, that it means the electricity produced from that source will be cheap as well.

But, as we covered in the above guide on the general factors that impact electricity prices, the cost to generate electricity is just one factor that can have an impact.

This involves the power grid, infrastructure, and whatever supporting capital and services you need to deliver power from that energy source.

There’s also other costs added to the final electricity price, such as cost by the retailer, taxes, and so on.

So, electricity should be look at like a comprehensive service with many factors that make up the delivery of that service.

Those factors and the overall requirements to deliver the service can change with different energy sources used to generate the electricity.

More expensive electricity is not necessarily a bad thing.

Like all products and services, increased price can be a feature of added benefits.

For example, Denmark has one of the best rated electricity services in the world according to some indexes.

For example, fossil fuels have often been linked to air pollution (and consequential human health problems and higher mortality rates), and greenhouse gas emissions that contribute to climate change.

Greener energy and renewable energy might be more expensive in some cases, but may also be better environmentally and socially by addressing these problems and others.

The obvious point here is that if there is a higher price for electricity, the higher price has to be linked in a clear and transparent way to that increased price.

But, Very Expensive Electricity Can Also Be A Sign Of Problems

Lack of supply of electricity compared to demand

Not enough competition amongst different electricity suppliers and retailers

These factors and more can be signs of an unhealthy electricity sector that isn’t functioning in a competitive, fair or free (as opposed to restrictive) way.

The Potential Future Of Electricity

Electricity, like all sectors, will change in various ways in the future.

Some factors to consider in the future that may impact on electricity prices and the various energy sources that provide electricity are:

CCS (carbon capture storage and use) technology for fossil fuels might be prone to failure, and is expensive

Carbon prices and taxes, and polluters tax can increase the price for fossil fuels that were previously cheaper to set up and run

Solar and wind technology, with continual investment and demand, are expected to continue to drop in price – potentially passing cost savings onto the end consumer

Residential and single house energy set ups (separate to the grid) in some areas could change how power is generated, and how much it costs

In Australia, looking to the future in the electricity sector as an example:

Remember there are costs of not decarbonizing [too]

Three priorities in the future that will require investment will be 1. Reducing emissions 2. Replacing the existing coal fleet and coal mines, and 3. Increasing supply of power stations to reduce risk and increase reliability of electricity supply

Check out this guide:

What is interesting to note from that guide, is, a place like Denmark has come out and said that as their renewable energy supply has increased, there may be little reason for their taxes on electricity to remain so high given that renewable energy share of electricity is now at a certain level.

So, we have to ask the question – what are we paying for in our renewable or green energy electricity taxes, and at what point have they served their goals or purpose?