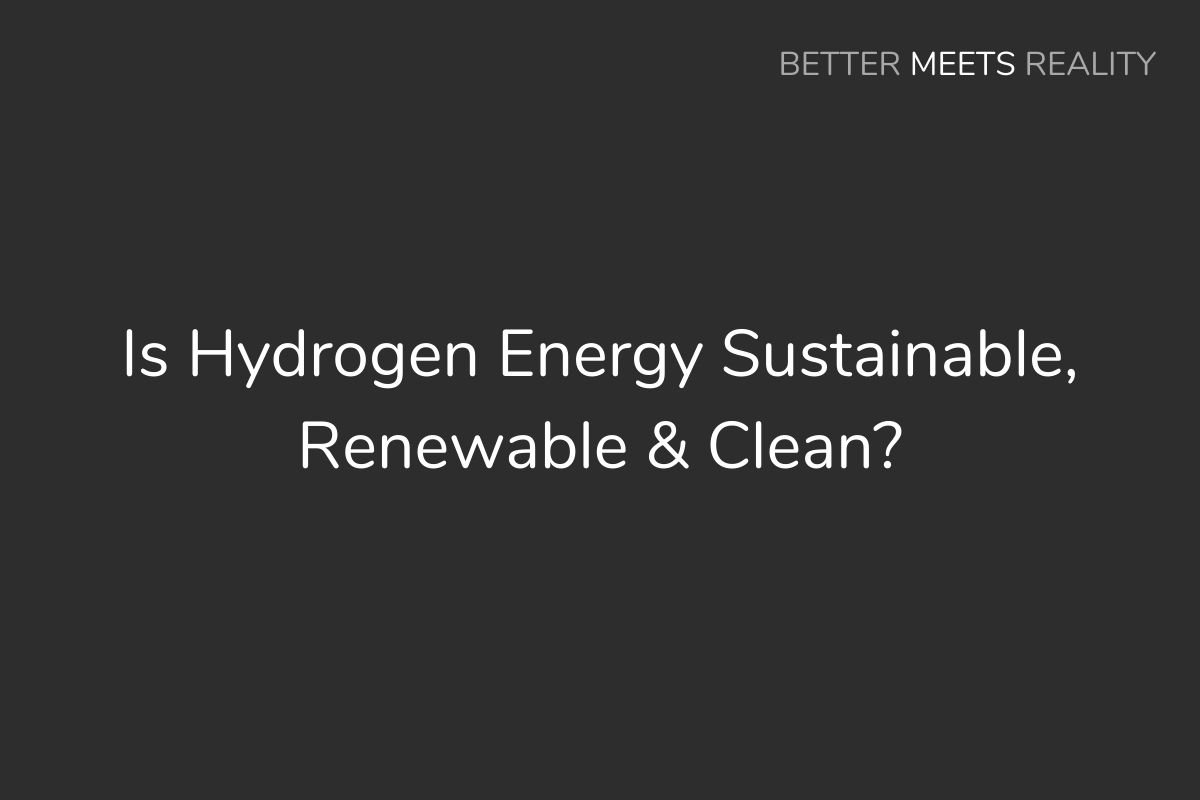 In this guide, we look at whether hydrogen energy is sustainable, renewable and clean.

We consider how hydrogen energy might rate across each of these three measures.

Hydrogen used for hydrogen energy has to be produced first.

So, how sustainable, renewable and clean hydrogen energy is depends in large part on how the the hydrogen is made.

Additionally, making hydrogen via electrolysis (separating oxygen and hydrogen atoms with an electrical current), might be more efficient, and therefore more sustainably use resources than methane steam reforming

Right now, most hydrogen is made from fossil fuels like natural gas via the reforming process.

Secondly, the energy sources you are comparing hydrogen energy to also matter in determining whether hydrogen is sustainable, renewable or clean.

Comparing hydrogen to conventional fossil fuel energy may make hydrogen look greener than comparing it to some types of renewable energy sources, and nuclear.

Right now, producing hydrogen from low carbon energy is costly, but that could change in the future with lower renewable energy electricity costs, and economies of scale in the scaling up or mass manufacturing of hydrogen energy technology (iea.org)

First, What Is Hydrogen Energy Exactly & How Is It Made & Used?

This guide outlines what hydrogen energy is, how it’s made, and how it’s used.

One thing to note about hydrogen energy is that the production of hydrogen, and the use of hydrogen for energy are separate processes.

The burning of hydrogen, or combining it with oxygen (where hydrogen reacts with oxygen, such as in a hydrogen fuel cell), only produces energy and water vapor (H20).

So, no matter how the hydrogen is produced, the hydrogen usage stage is usually always relatively clean and sustainable.

Although, when atmospheric air is used instead of pure oxygen, a small amount of nitrogen oxide [which contributes to air pollution] may be released (wikipedia.org)

Now, moving on to look at how sustainable, renewable and clean hydrogen energy might be …

Sustainable is a broad term that may generally mean that the energy source can be maintained without being depleted, and that it doesn’t involve significant environmental degradation.

There’s several potential reason for this – depletion of fossil fuel resources, air pollution, and greenhouse emissions might be three of the main reasons.

Clean is a general term.

It can refer to a number of things such as whether something pollutes or contributes to environmental issues, or it can be specific and refer to whether an energy sources causes air pollution and greenhouse gas emissions.

Hydrogen made from renewable energy sources like solar energy may be cleaner than hydrogen made from fossil fuels, where environmental issues like greenhouse gas emissions and air pollution may be more of a factor during the hydrogen production process.

Examples Of The Negative Environmental Impact Of Hydrogen Energy

– [Conventional hydrogen production using natural gas, as with the use of any hydrocarbon, emits carbon dioxide] (wikipedia.org)

– Steam-methane reforming, the current leading technology for producing hydrogen in large quantities, extracts hydrogen from methane. However, this reaction releases fossil carbon dioxide and carbon monoxide into the atmosphere which are greenhouse gases exogenous to the natural carbon cycle, and thus contribute to climate change (wikipedia.org)

– … production of hydrogen is responsible for CO2 emissions of around 830 million tonnes of carbon dioxide per year, equivalent to the CO2 emissions of the United Kingdom and Indonesia combined (iea.org)

Examples Of The Positive Environmental Impact Of Hydrogen Energy

Examples of the positive environmental impact of hydrogen energy:

– … the addition of 20% of hydrogen (an optimal share that does not affect gas pipes and appliances) to natural gas can reduce CO2 emissions caused by heating and cooking (wikipedia.org)

– Alongside mono-fuel hydrogen combustion, combustion engines in commercial vehicles have the potential to be converted to run on a hydrogen-diesel mix. This has been demonstrated in prototypes in the UK, where up to 70% of CO2 emissions have been reduced during normal driving conditions (wikipedia.org)

– Hydrogen can … be produced from water through electrolysis, which is less carbon intensive if the electricity used to drive the reaction does not come from fossil-fuel power plants but rather renewable or nuclear energy instead (wikipedia.org)

– Due to their high efficiency and zero-or near zero-emissions operation, hydrogen and fuel cells have the potential to reduce greenhouse gas emission in many applications (energy.gov). The energy.gov resource in the resources list outlines how hydrogen helps decrease emissions across different uses such as light-duty highway vehicles, specialty vehicles, transit buses, auxiliary power units, and combined heat and power (CHP) systems

– [It’s also worth noting that the efficiency of electrolysis is greater than methane steam reforming, at 70-80% compared to 60-75%] (wikipedia.org)

As has been mentioned elsewhere in this article, renewable energy sources used in production of hydrogen may help decrease the emissions and air pollution associated with hydrogen production.

The terms grey, blue and green hydrogen energy have been created.