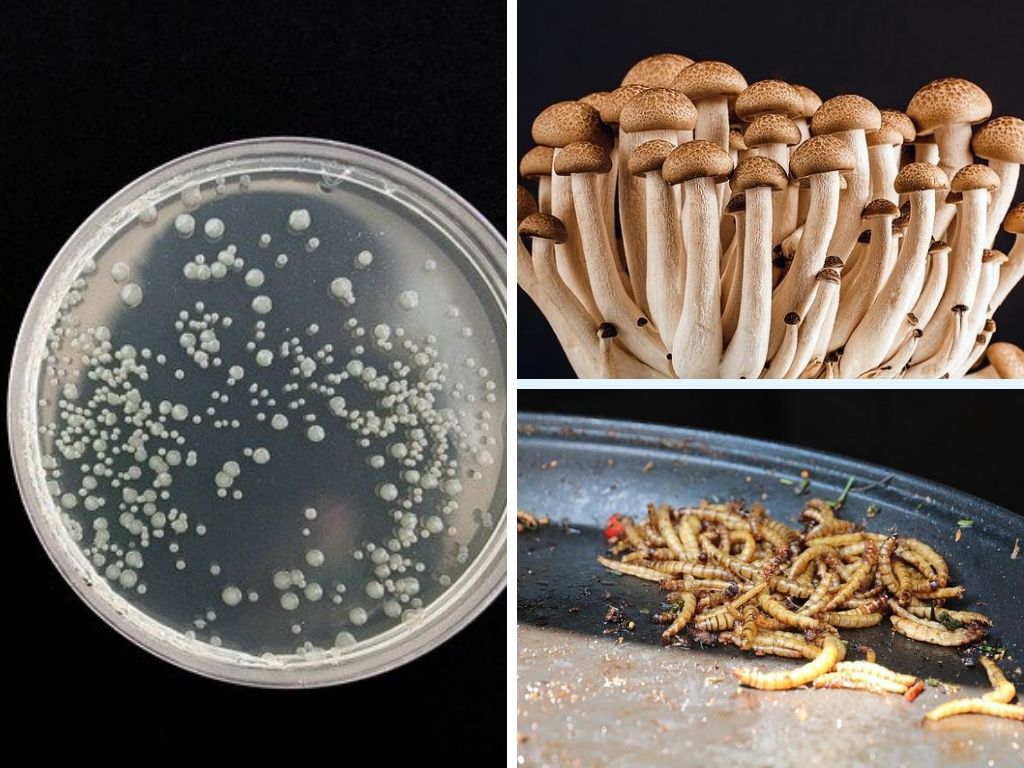 In the guide below, we list some of the different plastic eating organisms and chemicals.

A summarised list of those organisms and chemicals are (note that that all of these are organisms, except for enzymes which are a chemical or protein):

– Enzymes (a chemical, or protein)

– Yeast (which is actually a fungus)

We’ve written about plastic eating bacteria separately in this guide.

Technically there is a difference between microbes and bacteria.

In the context of plastic eating organisms, many reports refer to microbes and bacteria as the same thing.

Enzymes are not technically living organisms – enzymes are only chemical in nature.

Enzymes are actually a type of protein that bacteria secrete/release, that can speed up chemical reactions.

One example of how enzymes from bacteria work, is how Ideonella sakaiensis secretes the enzyme PETase to split the chemical bonds in PET plastic polymers, and this turns PET into smaller molecules

In 2020, scientists created a ‘mutant enzyme’ that could break down plastic in hours.

And, new study and testing across the world has found that bacteria are evolving to have enzymes that degrade plastic:

In 2021, across soils and oceans and other environments across the world ‘… [there were] 30,000 different enzymes [found] that could degrade 10 different types of plastic’ (theguardian.com)

Several different types of fungi and mushrooms have been found to digest or degrade plastic.

[In 2011, it was found that] several dozen fungi [from the Pestalotiopsis genus] were able to [digest and degrade polyester polyurethane and convert] it into organic matter. [These fungi could survive solely off this plastic in both aerobic and anaerobic conditions/environments, and this might make these fungi good for both landfill, and ocean environments]

[Since then, it’s also been discovered that the] Oyster mushroom … is capable of decomposing plastic [and this might make it suitable for] at home Oyster mushroom recycling systems …

wikipedia.org also indicates that prior to the discovery of the bacterium Ideonella sakaiensis in 2016, there ‘were a small number of bacteria and fungi, including Fusarium solani’ [that degrade PET plastic]

Yeast is actually a fungus.

Compared to mushrooms, yeast grows as a single cell.

At least one yeast strain has been found to excrete an enzyme that degrades biodegradable plastic.

[One] research group identified the yeast strain Pseudozyma, common worldwide, that excretes an enzyme that eats away at biodegradable plastics

[This yeast strain could be useful for vegetable farmers that use plastic mulchfilms, and could also be useful in other applications for biodegradable plastics]

There’s been bugs, multiple types of worms, and a type of caterpillar that may have shown evidence of being able to degrade plastic.

But, some of the studies have been questioned in terms of their findings.

When polyurethane breaks down it can release toxic chemicals that would kill most bacteria, but the bug identified actually uses the material as food to power the process.

[There is a study that indicates that] gut bacterium from mealworms consumes polystyrene [and about] half the polystyrene carbon they ingest to CO2 (cen.acs.org)

A 2017 report indicated that ‘… wax worm caterpillars could break down polyethylene [due to some type of enzyme. However, there’s also been dispute of the report and it’s findings i.e. there’s been debate over whether caterpillars are actually capable of biodegrading plastic]’ (cen.acs.org)

Something worth noting is that cen.acs.org explains the difference between organisms and enzymes simply breaking down plastic into smaller micro-plastics and tiny plastic fragments, and, completely biochemically breaking down polymers of plastic.

What they note is that based on this point, and also how the studies were conducted in terms of the testing and other methodology they used, several of the studies and reports (regarding different organisms like bacteria, worms and caterpillars) might be questioned and their findings debated.

Are Plastic Eating Organisms & Chemicals The Solution To Plastic Problems?

Beyond the question of exactly how organisms break down plastic, and what the by-products are, something we mention in our guide on plastic eating bacteria is that plastic eating organisms have a range of current limitations and drawbacks to their use (such as effectiveness, speed, scale of use, cost, and so on)

For these reasons, plastic eating organisms might only be one of many options to address plastic problems like plastic pollution at this point in time.